The “browning” of California – an update regarding the one billion dollar “emergency plan.”

On March 19th, five days after my posting of The “browning” of California, Governor Brown announced a billion dollar drought relief plan. For those who have not watched the YouTube broadcast of it from the CalChannel – which I suspect are most of you as only 71 views as my writing this were noted, you should watch it in its entirety , paying special attention to the opening remarks from all speakers. And whereas this is not the second installment where I will address all five aspects of the common sense sustainability model, due to this “emergency” announcement, a retrospective was in order.

Prior to Governor Brown speaking, it is important to hear what others say about our drought. For that reason, I made a “best attempt” to transcribe as closely as possible, but defer to the video “for the record” the comments and context of the press conference.

No single solution is the answer: – it will take all of the “common sense

sustainable” steps and more to address the drought. And make no mistake about it – it is not just a “California thing,” but a situation that can impact the entire United States and beyond. We are all in this together, and Mr. Kevin de León got it spot on – “There is no greater crisis facing our state today than its lack of water.”

This did not come up overnight…January 5th of this year I published What Have We Learned About the California Drought Since 2009? In the 60 Minutes segment from 2009, then Governor Schwarzenegger stated that his state is in crisis. “We’ve been in crisis for quite some time because we’re now 38 million people and not anymore 18 million people like we were in the late 60s.” We heard that rhetoric again in the drought press conference! Action must be taken now, with REAL RESULTS. Actions cost money, and inaction will cost even more. So, the full California budget must be reviewed for possible funding for solutions.

Scheduled to come online in 2015 is the $734 Million Carlsbad Desalination Project . Budget numbers fluctuate up to “one billion dollars.” And whereas desalinated water will cost more for up to 112,000 households when in 2016 it is in full production, a typical household of four people can expect to pay approximately $5 to $7 more per month when the plant begins producing water as early as fall 2015 . BUT THEY WILL HAVE WATER!

You can’t ignore “the elephant in the room”: – the $68 billion dollar high speed rail project. Whereas I will not belabor the obvious, California must live on a budget. Water is clearly the most pressing short and long term issue for the State. Spending on “real water projects” and getting real results takes precedent on secondary projects such as the high-speed rail.

Spending $660 million on “flood control” in the middle of an extreme drought? 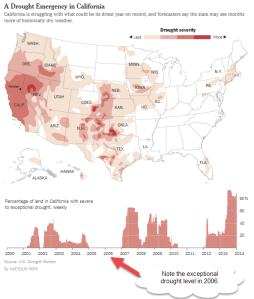 Whereas Proposition 1E Flood Control Bond Funding from 2006 was important in 2006 when our reservoirs and lakes held much more water, it is now 8 years later, with California being 4 years-plus into an extreme drought. Spending $660 million on legacy “flood control” efforts seems to be a mistimed priority today . Planning for the future is prudent, but we have some “options” for water storage today and getting water should be the number-one priority.

Using math: Using the $734 million number, and dividing the $68 billion rail budget number by it, you come up with funding for up to approximately NINETY THREE (93) possible desalination plants similar to the Carlsbad plant, which then could hypothetically supply water to over 10 million homes (10,376,022). Using the Governor’s 38 million population number, that would mean approximately 27% of the entire state’s population, could be served by 93 new desalination plants if built. California has approximately 840 miles of coastline with access to the Pacific Ocean from which salt water could be pulled from. Building those plants would be great for jobs in the state as well. Again, no single initiative is the full answer and undertaking such a plan warrants environmental study and brine management that results from desalination.

I don’t think “sounding like explosive growth” happened overnight or sneaked up on us helps: Whereas Governor Brown opened with “Well, we all face a challenge, because California for 10,000 years had only 300,000 or so residents. When you up that number to 38 million, and you increase the amenities, and the consumption, you get a problem when you are in the middle of a desert.”

This is a band aid: Assembly member Kristin Olsen aptly stated “this is a band aid (referring to the plan); this is a temporary, small-step towards fixing a monumental problem.” She then called on us all coming up with “long term” solutions to address the water problem. “…I’m calling on the State water agencies, on state government to get projects out of the red-tape; to get them moving because they have been hung-up for decades. We need more storage, more desalination, more water recycling projects, more other innovative projects that will increase supply and deliver it to the communities who so desperately need it.” This speaks directly to the common sense sustainability model.

Senator Bob Huff commented “…but it really comes down to personal responsibility now – cutting back our consumption.” This is the crux of the problem. It seems difficult to address the reality that water rationing must be enacted to slow the problem down until initiatives and programs that achieve results are in full-swing to make the difference in the water crisis and drought. Left to requests only, cutting back on consumption simply will not happen. 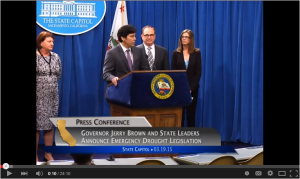 right to it: “There is no greater crisis facing our state today than its lack of water. It’s an economic crisis because our farms and our factories need water to create jobs and supply the worlds’ food and products. It’s an environmental crisis because our snowpack is lower than ever before in recorded history. Our rivers and streams are dry. And our natural resources are shriveling up. It’s a public health crisis because tens of thousands of people are without clean drinking water. That number is increasing.”

“Now our state budget is written in the winter before the legislature convenes in January. …Now we are almost in spring and we know we have had almost no water this year. Now NASA is now estimating we have one year or two of water supply left and that is creating a renewed sense of urgency. Simply put, we cannot wait until June when the budget passes to start directing funds. We definitely can’t wait for Washington to help. Congress hasn’t pitched in the penny so far. And that is why the governor, speaker Toni Atkins, and my republican colleagues Mr. Huff and Ms. Olsen are here today to announce an emergency drought and water supply reliable package. WE NEED TO ACT NOW. Our package is two bills. One, an appropriations bill and the other a policy bill. The first bill appropriates over a billion dollars in Proposition 1 bond dollars, water bond from last year and Proposition 1E from 2006. These funds were approved by the voters for water and flood related investments. We need to get the money out the door now for shovel-ready projects and existing water projects that only need funding to get started. No delay. No red-tape. The second bill speeds up contracting for funds and creates its first (of its kind) office to help disproportionally impacted communities respond to their water challenges and access State resources. Translation: many of the poor communities in the Central Valley. Taken together this package provides a major boost to our State’s efforts to manage our water crisis and strengthen our current infrastructure.”

“Now, I want to thank the Governor, Governor Jerry Brown and Madame Speaker Toni Atkins for working together to respond to this crisis. It shows how we as leaders can get things done when we all work together in a common purpose. I also want (to) thank my colleagues in the Senate who have been involved from this in this from its inception, especially Senators Wolk and Fran Pavley (spelling and verification from speaking not available) who are on the budget sub-committee that oversees water and flood funds. Also want to thank Senator Cathleen Galgiani for her tireless work to get funds for heavily impacted districts. Finally, I want to make one note that this is just a down payment on our efforts to address this drought. This is just the first round. We have much work to do. The Governor has asked us to approve additional flood and water funds later in the budget cycle, and we will do that. And you can bet, all of us collectively, will be back with our sleeves rolled up to do more to help Californians through the crisis. And that includes tackling long-term challenges of climate change. We will ensure that our state government is on the job, full-time to use all the tools at its disposal to help our state throughout this drought.”

Very quickly…Mr. Kevin de Leon recapped some of the preceding in Spanish…

“With that it is with great pleasure that I have an opportunity to introduce my good friend, my partner in the legislative branch that is the Speaker, Ms. Toni Atkins.” She reiterates many of the same points (see video). She then introduces Assembly member Kristin Olsen (see video). She previously said “this is a band aid; this is a temporary, small-step towards fixing a monumental problem.” She then called on us all coming up with “long term” solutions to address the water problem. “…I’m calling on the State water agencies, on state government to get projects out of the red-tape; to get them moving because they have been hung-up for decades. We need more storage, more desalination, more water recycling projects, more other innovative projects that will increase supply and deliver it to the communities who so desperately need it.”

Senator Bob Huff makes supporting statements as well. “Everyone in the state has to ask the question ‘how can I conserve more water?’” “You can’t count on the government (presumably referring to the need for the people to do their part now), we’re doing our part, but it really comes down to personal responsibility now – cutting back our consumption. And then we, as legislators, need to look at other ways we can help us all accomplish that goal.”… “One of the ideas that came up recently and it’s not a new idea, but it’s pretty simple, is just in our older buildings putting in lower-flush toilets in. And that’s not complicated, it’s not high-tech, but it achieves something very quickly. Those are the kinds of solutions we need to be looking at going forward as we figure out ‘how do we use the water responsibly so we don’t continue to drown our crops, our jobs and we can pull out of this together.” Once again, watch and listen to the press conference video and then YOU decide on the comments and suggestions made within it. Then Mr. Huff introduces Governor Brown. 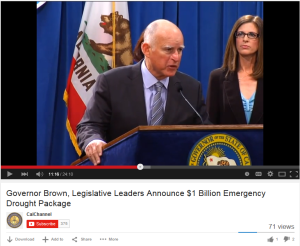 71 views and growing? As of this writing on March 28, 2015, the press conference that only received 71 views as of two days after it was aired: https://youtu.be/Tgj7efM2pyE. That is very concerning regarding the gravity of the situation and the need for us all to be involved.

NBC4 TV Los Angeles: summed it up in the news segment “Governor, California Lawmakers Unveil $1B Emergency Drought-Relief Plan”. The image below gives the quick analysis of the plan. Click link or image for NBCLA video.

We all must work together and explore all of the common sense sustainable solutions to address not only the California drought, but the worldwide water crisis in general. Please watch both videos in their entirety…then decide for yourself.

This entry was posted in Uncategorized. Bookmark the permalink.